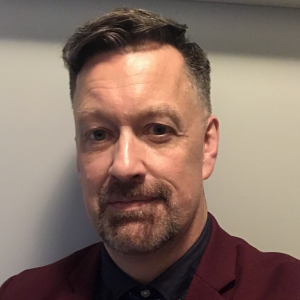 Dr. David Byres is Associate Deputy Minister for Clinical Leadership with the Ministry of Health. David has over 25 years of experience in the health sector including having served as Executive Vice President for Providence Health Care and is a former Chief Nursing Officer in British Columbia. He leads British Columbia’s Nursing Policy Secretariat and the development of an integrated health provider strategy in support of the Ministry of Health’s strategic objectives including the shift towards team-based primary care.

David began his health career working in community mental health settings and then as a registered nurse in medicine, mental health, community and emergency settings.

David completed his Doctorate in Nursing Practice at ASU in Colorado in October 2016. He holds a Bachelor of Arts degree in Psychology from the University of Victoria and a Bachelor and Masters of Science degree in Nursing from the University of British Columbia. He is an Adjunct Professor with the School of Nursing at UBC and Adjunct Assistant Professor with the School of Nursing at the University of Victoria. He is a Certified Health Executive with the Canadian College of Health Leaders. David is also actively involved in research and is currently a co-principal investigator on a $1.7 million CIHR-funded study examining a health equity intervention framework to promote the provision of equity-oriented care for Indigenous people in British Columbia’s emergency departments. He is also a co-investigator with the $1.1 million CIHR-funded PORTIA research team examining a program of outcomes research on treatment for injectables for addiction.

David holds a Fellowship in Management for Executive Nurses from the Wharton School of Business, University of Pennsylvania. He is a past co-chair of the Nursing Research Advisory Council for the Michael Smith Foundation for Health Research and a Past President of the Xi Eta Chapter of the Sigma Theta Tau International Honor Society of Nursing. He has previously served on the Board of Directors for the Registered Nurses Foundation of BC. In 2010 he was presented with the Award of Distinction from the College of Registered Nurses of British Columbia. In 2012, David was presented with the Practice Partnership Award from the University of British Columbia School of Nursing. In 2015 he received the 3M National Quality Team Award. In 2016 the Canadian Nursing Association featured David and his current work in the Canadian Nurse journal as a “Nurse to Know.” In 2017 he was recognized in the Canadian Nursing Association’s list of Canada’s 150 nurse innovators and health care champions. In 2018 he was awarded the Dean’s Medal of Distinction from the Faculty of Applied Science at the University of British Columbia.