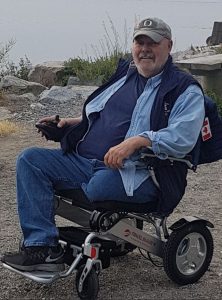 My name is Richard Cave and I am a survivor of sepsis. I am an above-knee amputee as of September 22, 2016. Since 2013, I have undergone 18 surgeries for vascular disease and diabetes. I’m a certified Peer Councillor for the Canadian Coalition of Amputees and volunteer every Tuesday at Peace Arch Hospital to council new amputees and heart/stroke victims. I’m also a patient partner at Peace Arch and Delta Hospitals, working on various committees within the hospital structure to provide a patient’s perspective to health services.

In March 2018, my bladder stopped functioning for three days after vascular surgery. After a series of interventions, it started to work again, but I ended up with a bladder infection and was treated with antibiotics and IV fluids.  Over the year, I suffered four such bladder infections. I only had a few signs of infection when, in February 2019, I realized I had lost strength in my arms and leg. I fell from my bed and later my stair glide. My wife called the fire department and they came to lift me back into my chair. On their second call to see me, they decided to have me transported to the hospital.

I was admitted to the Emergency Department and went through a series of tests. It was at this point I was advised I had sepsis as a result of an infection. The next morning, I suffered a heart attack when I was being transferred to an inpatient ward. I remember someone pumping my chest and then waking up in the Intensive Care Unit. Three days later, I ended up having four stents placed in my heart. I am so very fortunate to be alive and on my way to recovery. All I can say is: if you’re having a heart attack, it’s best to have it in a hospital!

I have since learned the signs and symptoms of sepsis and, in hindsight, I realize what was happening.  The memory loss associated with sepsis had taken control and I was unable to clearly see the warning signs. I would be pleased to assist and talk with those who are concerned or wish to learn more about sepsis.