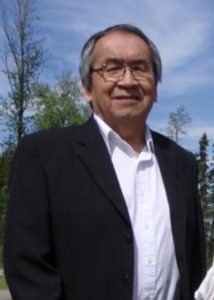 My father was Ronald Heva Peal – Sim’oogit K’amlaxyaltkw of Wilps Luux Hoon – from the mighty Nass River Valley and traditional Nisga’a lands. He was born to Sam & Ida Peal in October 1945. He was an Industrial Education teacher from 1979 – 2002 at Nisga’a Elementary Secondary School in Gitlax̱t’aamiks.

My father experienced two heart attacks in April 2012 at the age of 66. After the second one and although he started to regain strength by exercising and eating healthy, he got very sick and seemed to have a common cold, but he just couldn’t get rid of it. He visited his local health centre and was told that he needed to take Tylenon and, over time, he would get better.

He continued to feel horrible and we thought he had pneumonia. He could never get warm, he was so tired that walking was difficult, he could not eat and he fell three different times at home. One day he could not get out of bed, so we called 911. When they arrived, my father had a fever and was extremly cold and shaking. He had pneumonia and ended up with sepsis. He survived it and got healthy again, but it took a lot longer to get stronger and walk even up his stairs at home, as he would run out of breath. But my father kept trying! He even bought a treadmill and was exercising daily.

Unfortunately my father ended up getting sick again. Due to his heart condition he had to be transported to St. Paul’s Hospital, in Vancouver, where we stayed for almost two months. There he suffered a pulmonary edema that caused him to be put in the ICU, where he was later found to have terminal leukaemia. My father passed away last year in Terrace at Mills Memorial Hospital.

My father has left a legacy of five daughters, 15 grandchildren and thousands of students he taught beautiful artwork and design. The things I will miss the most about my dad is his encouragement and love of family – especially the grandchildren, and his smile and amazing sense of humour. I loved to walk with him or be eating somewhere in Terrace. We’d generally bump into one of his former students, who would get this amazing smile on their face saying, “Hey, Mister Peal! How’s it going!?” and shake his hand – that was always the best!