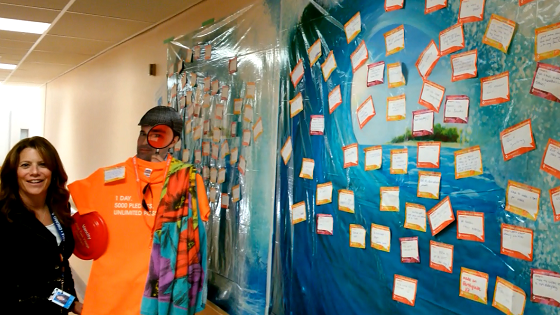 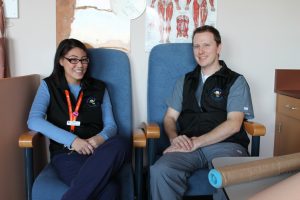 Contributed by Tiffany Ng, RN, and Ryan MacKay, Burnaby Hospital. Their creative and engaging efforts to bring Change Day to the staff of Burnaby Hospital led to 210 pledges- one of the highest pledge counts for a single organization!

How long have you been at Burnaby Hospital?

Tiffany: I’ve been a registered nurse here for about five and a half years.

Ryan: I’ve been working here for about seven years.

Tiffany: And we became a part of the Patient Navigation Team in September, and we were in charge of taking Change Day off the ground.

What does the Patient Navigation Team do?

Tiffany: The Patient Navigation Team is about staff engagement and quality initiatives, and sustainment of these initiatives. Some examples are our patient whiteboards and the 48/6 documents, better known as the interprofessional care and discharge plan. And also the different events: we had a falls prevention day, and Change Day, for instance.

So basically we get an idea for an initiative or event, and then Ryan and I take it off the ground. We bring it to the frontline staff and engage care champions on each unit to carry these initiatives out. We make the hospital pretty as well! We have the tree, we made the patient whiteboard bulletin board in the hallway, we put up posters around the hospital, and we made the care champion hall of fame.

Where do you get ideas for new initiatives or events?

How do you engage staff throughout the hospital?

Tiffany: A large part of the navigation team is about education of front-line staff. We use the roving cart to bring the education to the staff, because a lot of times they’re too busy to come to workshops. So we give them a quick and dirty version of a topic of concern, by bringing that education to them, and then we go from there.

And how did Change Day fit into those activities?

Ryan: We made a big drive to let people across the hospital know that we were gathering pledges. Tiffany and I went unit to unit, we talked to people directly, and we handed out pledge forms. Then we gathered up their pledges and added them to our Pledge Tree.

Tiffany: And in the week leading up to Change Day, we had a contest, so everyone knew it was coming!

What was the contest?

Tiffany: Every staff member who made a pledge was entered in a draw to win a pizza party for their unit. So there was a sense of competition and encouraging people to make pledges, because the more entries your unit had, the higher your chance of a pizza party!

Ryan: At the end of the day, it wasn’t about choosing a winner, because the winner was just drawn by chance. But the contest did increase awareness of Change Day and it helped us to get so many voices involved from our hospital.

Tiffany: It was really nice to see how receptive staff were to the contest. They were so excited about winning that it actually motivated them to make pledges. That was so great to see, that they were making the time to make pledges and carry them out.

Ryan: : Many units came together to compare their pledges. It was a nice opportunity to rally around the central idea of providing better care for our patients. It was a really positive thing.

Tiffany: I think it was just the fact that the whole hospital was so on board. We had all the departments—not just nursing, but biomedical engineers, lab, health records, all the different nooks and crannies of the hospital—they all participated in the contest. Which was great, because it actually made Burnaby Hospital a stronger community, it made it so welcoming.

What did you do on Change Day itself?

Tiffany: What was really inspiring was that it wasn’t just about staff making pledges on Change Day. Even patients that were walking by were interested, asking us, “What is this?” We’d have a chance to explain Change Day to them, and after they would make the pledge themselves as well to improve their health. That was quite encouraging to me- I thought, “Wow, if patients can do it, we can do it too.”

What pledges did you personally make for Change Day?

Ryan: My pledge was to recognize our patients’ strengths, and to incorporate them into their care plan. My pledge reminds me to have those conversations with my patients and to get to know them. So when I’m with a patient, I might be listening to their breathing or helping them with lunch, but I’m also going to try to get to know them a little bit and understand what may motivate them to pursue their own care plan.

Tiffany: Mine was being patient in every aspect of life. Because I can be quite impatient! Sometimes it’s quite a struggle. But you won’t get anywhere without challenges.

Are you still seeing Change Day pledges in action at Burnaby Hospital?

Ryan: Yes, a lot of [the pledges] were a positive call to action, to consider how we may improve our patient’s care in an on-going way. I think that when people pause to reflect on how they want to provide better care, then they’re likely going to incorporate these ideas into their day.