Conversations About Living and Dying Well

Conversations About Living and Dying Well 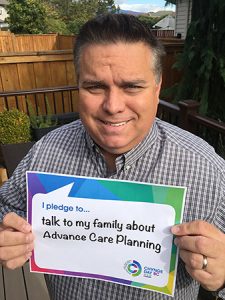 We had gathered for a birthday dinner and were talking about my in-laws’ upcoming wedding anniversary when my father-in-law said something my wife quickly tried to dismiss. He spoke about making their 45th anniversary memorable because he might not be around to celebrate their 50th.

It’s not the first time he’s raised his own mortality. He’s already overcome two major illnesses in his life, but as he ages, he knows his time is winding down.

My mother- and father-in-law are still in good health. Both are active, watch their diet and get their sleep, which is probably why my wife has a hard time hearing her dad speak about dying.

Nonetheless, his comments got me thinking: Do we know what kind of care he wants when he becomes ill? Does he want an aggressive treatment plan that exhausts all options, or are there limits to what he wants done?

At the BC Centre for Palliative Care, we are working to normalize conversations about living and dying well. Thinking and talking about what’s important to you helps you, and those closest to you, prepare to make future health-care decisions. This will help you receive the care that’s right for you – care that’s aligned with your wishes.

It’s why we partnered with the BC Hospice & Palliative Care Association to fund and train hospice societies to hold Advance Care Planning sessions for people in their communities.

We’re also helping train physicians to have better conversations with their patients from the time they are diagnosed with a serious illness so they can help uncover what matters most to their patients about their care.

When it comes to my own family, I will admit we’ve got some talking to do. We’ve celebrated my in-law’s 45th and 46th anniversaries, and we’ve yet to talk about their wishes for care.

Our friends at the Comox Valley Hospice Society are fond of saying, “It’s never too early, until it’s too late.” The quote is quite apt because who doesn’t want to believe there’s always more time; that there’s always tomorrow. But what if tomorrow doesn’t arrive the way we’d like?

I invite you to join this pledge and talk to your family.

You can learn more about Advance Care Planning at www.bc-cpc.ca/acp.