An End to Hallway Nursing

This award was formally named “Living with Illness”. Our Excellence in Quality category names changed in 2020 to reflect the updates to our BC Health Quality Matrix. Visit our Categories and Criteria page to find out more.

The 46-station hemodialysis unit at St. Paul’s Hospital services roughly 300 patients each year. It includes a renal vascular access program (vascular access uses a surgically-created vein to remove and return blood) which, until recently, had no dedicated beds. This meant that patients undergoing hemodialysis were forced to do so in a hallway or another space not designed for hemodialysis care. 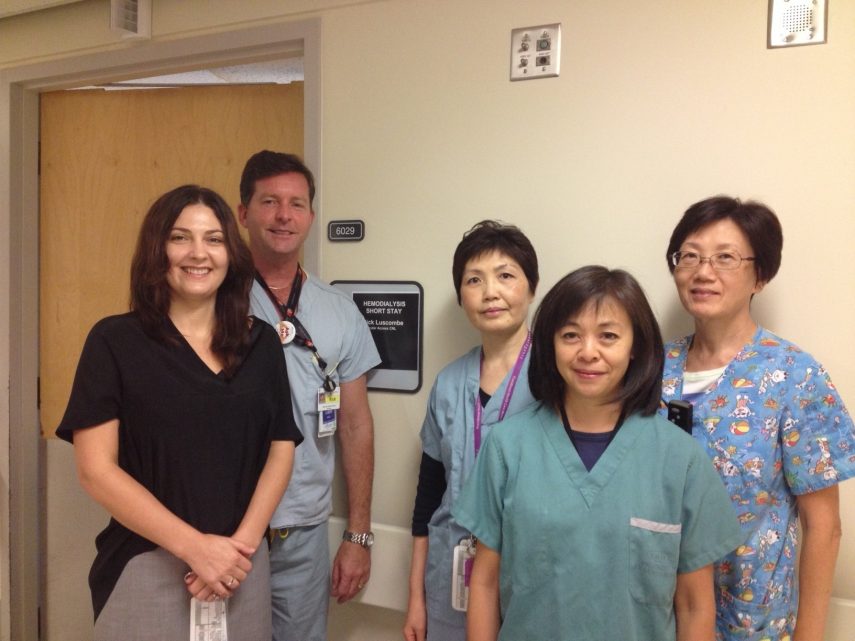 Compounding this issue, nursing resources were being diverted from patients receiving care in the main hemodialysis unit to the vascular access patients because they were being treated in the hallway, leaving the unit short of staff and putting both the patients in the hallway and those on hemodialysis at risk. There were also certain treatments that vascular access patients could not benefit from simply because there was no place to deliver them.

Understandably, patients receiving hemodialysis for the first time, and in the hallway no less, were fearful and confused. They were often located near critically-ill patients and families in distress. There was no onboarding process to orient them or to document their progress on self-care abilities. The unit was chaotic and overwhelming.

As a result, the hemodialysis unit decided to pilot a Hemodialysis Short Stay Unit to eliminate hallway care, and create a patient-centred care experience that would promote self-management. The unit devoted one room with three stations solely for vascular access patients and staffed it with a 1.0 FTE registered nurse. Patients used the room for their first three dialysis treatments, and received education and orientation to the process. These treatments were also observed by Providence Health Care’s Patient Advisory Group so that they could provide feedback as well.

The unit engaged patients and the Patient Advisory Group, and heard that helping patients prepare for hemodialysis was an opportunity for improvement. Additionally, an interprofessional team of patients, nursing leaders, educators, physicians, allied health professionals and change management experts was formed to conceive, develop and implement the pilot. In order to make the process changes, they used the Model for Improvement and numerous Plan-Do-Study-Act cycles.

Since the short stay unit opened, no procedures have been performed in the hallway or off service. New and innovative treatment therapies can now be attempted, where previously they were not an option due to the lack of a private room. One of the most significant outcomes is how the unit has opened up opportunities for 1:1 patient teaching. Patient self-care frees up nursing staff to address more direct or urgent care, and involving patients in their own care has shown many positive results.

Surveys show that staff engagement has improved since the short stay unit opened; sick hours have decreased and so has the amount of staff overtime since it is now easier to optimize patient schedules. These improvements are impacted by numerous factors and initiatives, but the short stay unit is certainly one of them.

The unit plans on spending its sponsorship to start a program for patients to become leaders in vascular access care so they can teach other patients. In addition, the lessons learned and positive feedback about patient orientation and teaching will be utilized throughout the unit’s next project to improve quality of care: a hemodialysis buddy system, which will further enhance and promote the patient experience by providing peer support during this difficult transition.