Manager of Facilities and Housekeeping at Menno Place

As the Manager of Facilities and Housekeeping at Abbotsford’s Menno Place, which provides long-term care for 700 people, Bas Kervel oversees the quality of cleaning in the care home’s six buildings. Several instances of housekeeping team members suffering allergic reactions and sensitivity to cleaning products as well as his concern for people who suffer cognitive impairment motivated Bas to find a new cleaning method. 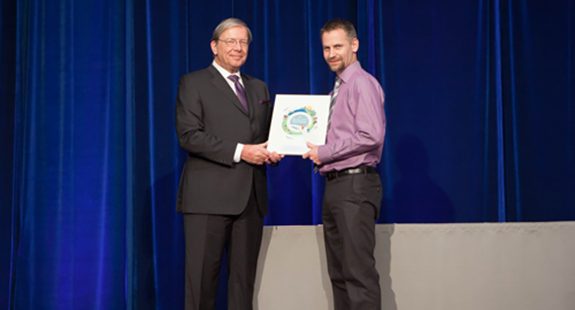 Bas spent hundreds of hours, many outside of his regular work day, researching possibilities and bringing his findings to the management team and the board of Menno Place. He was led to an aqueous ozone system that provides chemical-free cleaning, sanitizing and stain removal by infusing tap water with ozone. After consulting with Fraser Health and WorkSafeBC, leading a six-month trial and training his 30 housekeeping staff on the new system, Bas helped Menno Place become the first long-term care home in BC to use an aqueous ozone system for cleaning.

Now, 99.99% of the bacteria, viruses and other organisms that threaten the lives of fragile seniors are killed in two seconds, compared with keeping a surface wet for up to 5 minutes under the previous chemical system. This reduces the amount of time that floor surfaces are wet and greatly reduces the possibility of a slip or fall by individuals, families and staff. Since there are no chemicals, there is no fear of leaving a harsh, toxic residue on surfaces.

This new system also alleviates Bas’ concern for people who are not able to verbalize when they are suffering an effect from the chemicals’ fragrances or vapours, as well as people unable to leave the care home when the fragrances waft through the air.

Bas estimates that staff productivity has increased by 50% since they began using the aqueous ozone system. He also predicts that Menno Place will break even in the first year of implementing the new system and anticipates a 50+% reduction in costs once the equipment is paid off.