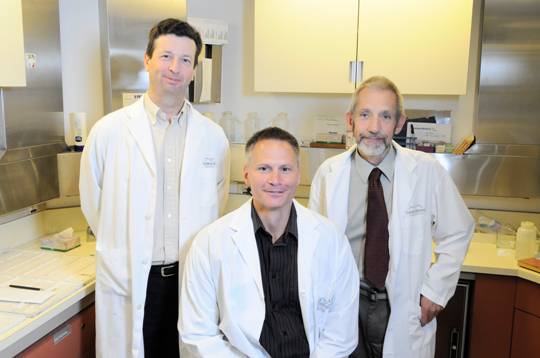 Led by Dr. Blake Gilks, Department of Pathology and Laboratory Medicine at Vancouver General Hospital, Dr. Robert Wolber, Regional Discipline Leader, Anatomical Pathology at VCHA and Mr. John Garratt, Technical Specialist Anatomical Pathology at VCHA, the B.C. Immunohistochemistry Testing (IHC) Quality Assurance Program engages every hospital laboratory in the province. Dr. Gilks has been called a world leader in being one of the first to recognize the utility of tissue microarrays (TMAs) for the purpose of assuring the good performance of IHC tests, especially for the breast cancer biomarkers estrogen receptors (ER), progesterone receptors (PR) and Her2. Combined with the quality assurance program development and operational expertise of Dr. Wolber and Mr. Garratt, the B.C. IHC Quality Assurance Program represents the first program of its type and scope in the world.

Beginning in the 1980’s, all B.C. breast tumours were tested for hormone receptors ER and PR in a provincial reference laboratory at Vancouver General Hospital (VGH). The frozen tissues were broken apart and tested biochemically. The complexity and expense of biochemical testing was not sustainable. In the 1990’s there was a transition away from biochemical testing to microscopic testing called IHC. This allowed more available and efficient testing worldwide, as well as testing on very small tumours that could not previously be tested. During this time, Her2, another important biomarker, was discovered. While the tests became more available, multiple testing methods were being used with no quality control.

In the late 1990’s, a method for placing up to 500 tiny portions of different patients tumours (tissue microarrays or TMAs) on a single microscopic test slide was invented. Dr. Gilks immediately realized this could provide the means of assuring good performance of IHC tests, especially for the breast cancer biomarkers ER, PR and Her2. In a series of scientific publications with national and international collaborators, followed by the BC Cancer Agency and B.C. health authorities, Dr. Gilks led the process of validating the IHC tests and documenting how these could be quality controlled by using TMAs.

Tissue biopsies from patients going back to the 1980’s that had been frozen and stored by the VGH laboratory were incorporated into TMAs. By correlating the new TMA results and the old biochemical values to the response of those patients to treatment, Dr. Gilks and his colleagues were able to confirm how well the new IHC tests performed and help identify the critical components of the tests that could be prone to variability. During this process they tested and correlated results and outcomes of over 3000 patients with breast cancer.

From their own research, and the knowledge gleaned from the research of other organizations, Dr. Gilks, Dr. Wolber and Mr. Garratt were able to initiate a Quality Control Program for British Columbia. This grew from initial pilot projects involving a few VCH and other neighbouring health authority laboratories to a voluntary province-wide program. The Diagnostic Accreditation Program recently sanctioned the participation in this program as meeting the requirements for quality control in this area. Dr. Gilks, Dr. Wolber and Mr. Garratt also organized a national scientific meeting in Vancouver with the Canadian Association of Pathologists on the quality control of IHC testing in April 2009. A national program modeled from the B.C. project, by the Canadian Quality Control in Immunohistochemistry, was discussed and will hopefully lead to the expansion of the program, ultimately benefiting women everywhere.