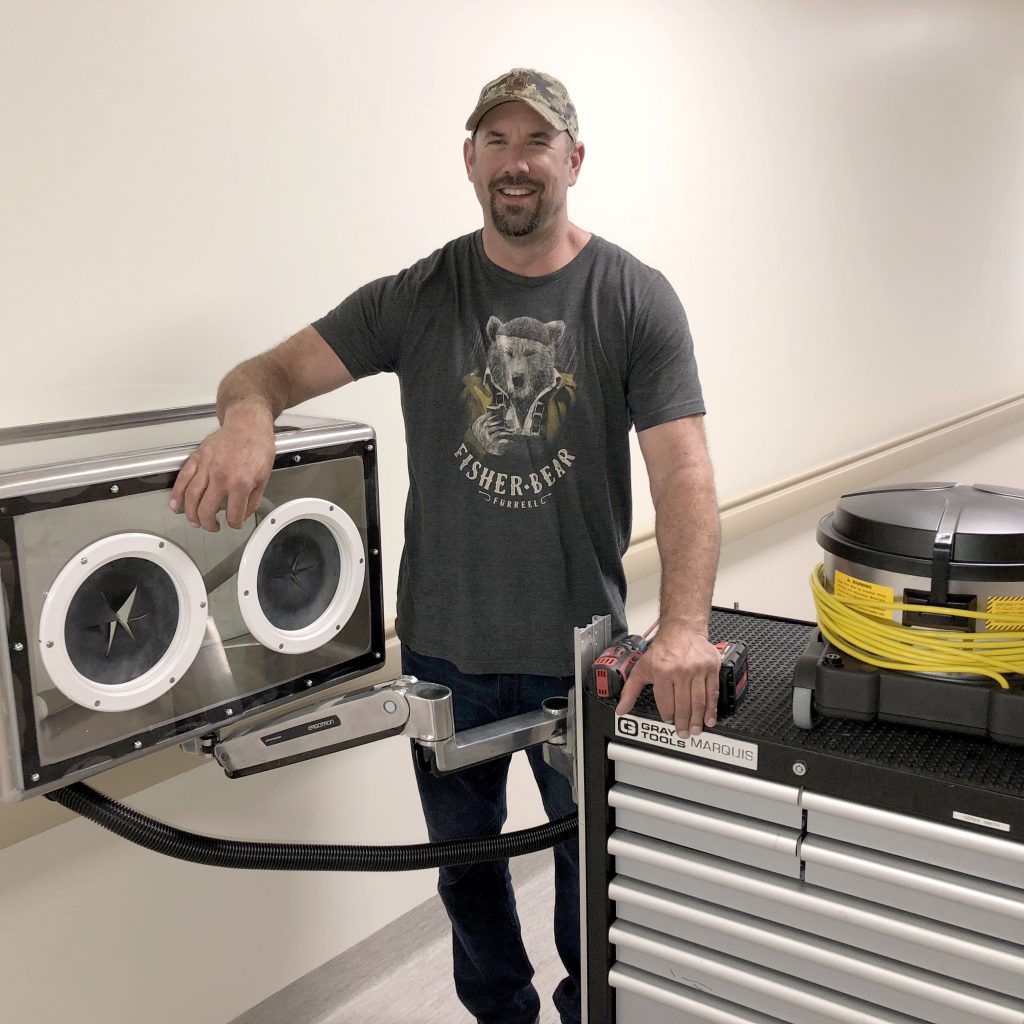 Derek Smith with his ipcGUARD

Derek Smith is a highly-valued member of the Building Maintenance team at North Island Hospital.  Once a member of the North Island Hospital Project (delivering two new hospitals to benefit patients in the Comox Valley and Campbell River on Vancouver Island) with Graham Construction, Derek now works on site with Honeywell, providing maintenance of the building and the systems that keep the hospital running smoothly.

Derek is well-known for his enthusiasm, cheerful demeanour and dedication. Particularly notable is his eye for detail, which helped him come up with a creative solution to an often-overlooked hazard.

While dust may be nearly indiscernible to the naked eye, Derek is keenly aware of the harmful allergens, airborne viruses, bacteria and spores that dust can contain and spread, as well as the hazards they can present to staff, volunteers and those who are the most susceptible: patients. Derek has been a large part of dust/infection control measures throughout the North Island Hospital Project, educating others and encouraging safety protocols in the two hospitals. Throughout the course of his work, Derek has been constantly learning and developing improved procedures and practices to increase efficiency and patient safety.

Recognizing the need for improvement in controlling and managing dust, Derek took it upon himself to create an innovative dust abatement tool called the ipcGUARD that increased efficiency for his team and reduced the risks dust can create. The ipcGUARD is a box that fits over work areas to create a seal and create negative pressure in order to contain dust during small repair jobs (such as patching a wall or installing a light switch). A vacuum and HEPA filter ensure that dust is not only contained but is also properly disposed of without the risk of re-release into the environment.

Derek’s invention has already been used in several projects, reducing downtimes so significantly that negative patient impact was nearly eliminated. Similarly, the ipcGUARD resulted in drastic cost reductions: in one project, the tool reduced the time and labour involved, resulting in savings of more than 98%.

Derek continues to hone his device to make it even more cost-effective, efficient and applicable, once again showing his attentiveness and dedication to improving patient safety through dust control. Now that’s thinking outside the box!