In 2017, Interior Health had a serious issue with physician engagement. Only 28 percent of physicians reported satisfaction with the organization as a place to practice medicine, ranking last place among the regional health authorities, and almost a third of medical leadership positions were vacant. That’s when Harsh Hundal was appointed as Executive Medical Director, and tasked with using his leadership skills to address the crisis and transform its culture. 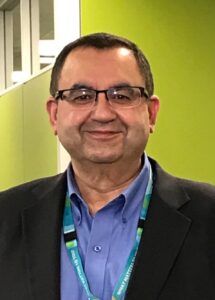 Among the many heartfelt statements made by Harsh’s colleagues in support of his application, one theme stood out: he is a leader who puts people first. To solve the crisis of physician disengagement, he started by listening, asking questions and building belonging; one relationship at a time. Though Interior Health includes 60 municipalities, 54 First Nations communities and 16 Métis communities, Harsh traveled across IH, an area equivalent to the size of England and Scotland combined, to learn. Often over a coffee or a meal, he sought to understand the personal and professional challenges facing patients, communities, clinical and non-clinical staff and leaders. He engaged with each of the region’s 28 medical staff associations and Doctors of BC to inform his “yellow brick road,” a detailed plan for how to improve engagement among Interior Health’s 2,600 medical staff. He grounded the plan in the basic human needs to belong, to be seen as a whole person not simply by your role or life challenges, to feel a part of an effective and supportive community, and to know that your leaders are invested in your development and health. This approach was inspired by conversations with First Nations care providers and patients, as well as his and his wife’s experiences as parents of children on the autism spectrum.

One of Harsh’s most innovative initiatives has been developing and implementing the NAVIG8 Emerging Medical Leaders Program, an in-house training program which accepted 26 physicians into its first two-year cohort in 2019 nominated by non-physicians.

As one participant, Launny Lowden, explains, “The personal connections I formed, the things I learned about leadership and quality improvement, and the incredible support I experienced from Medical Affairs and IH senior leadership transformed me. The sense of belonging I felt through Navig8 has altered my career path forever.” All 26 physicians will graduate from NAVIG8 in Fall 2021, and a new cohort of 25 medical leaders, including a midwife and a dentist, will begin their two-year leadership journey.

From an idea sketched on a piece of paper in a coffee shop with Dr. Mike Ertel, VP Medicine,  in the Fall of 2017, four years later NAVIG8 became the only health authority based medical leadership program in Canada recognized by the Canadian Society of Physician leaders as a pathway to certification.

Another transformative initiative strongly led by Harsh is a dyad leadership model which addresses the loneliness, challenges, and organizational demands of leadership in our complex health system. Harsh characterizes dyads as one of the foundational partnerships that are required to support the culture keepers of the organization in improving care. Dyad is a word, which has gone from rarely spoken to commonplace in meetings and introductions across IH. This ongoing work to evolve and mature the model, has led to 214 medical staff- administrator dyads to embark on the road to true partnership. The IH dyads were recognized as an essential strength of Interior Health by Accreditation Canada just prior to the pandemic.

Since taking on his role, Harsh has empowered Interior Health leadership and developed a culture of trust and respect that enables physicians to thrive. In 2020, a full 65 percent of physicians — more than twice as many as in 2017— stated that they were satisfied with the organization as a place to practice medicine. A Doctors of BC survey of all 22 medical staff associations also showed that 95 percent of their members agreed there was improved engagement over the last year. Harsh has also developed an action plan to support medical leaders in eradicating anti-Indigenous racism, through his role as Chair of the IH’s Medical Advisory Committee.

These tangible outcomes are the result of Harsh’s signature formula, “Leadership x Culture x People = Results,” which he has shared on request with Alberta Health Services and the Saskatchewan Health Authority. And his work isn’t done, as he continues to cultivate a culture of engagement that improves well-being, personal and team efficacy, community in healthcare and, ultimately, better care experiences and outcomes for patients across the region.

In the words of his colleague, Lisa Steele, “Harsh continually focuses on the reasons why we ‘do what we do’ as members of the medical staff – patient care! I can honestly say, there is a new era of medical leaders in Interior Health, and Harsh leads by example every day.”