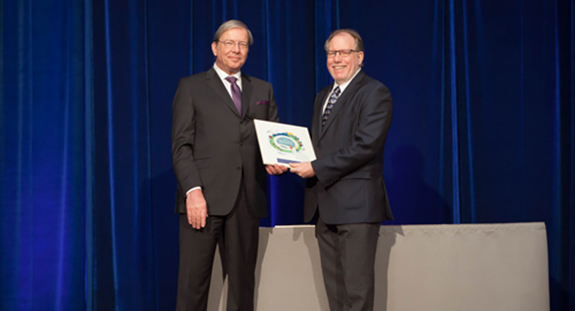 In 1983 Michael established the first pan-Canadian medical laboratory quality assessment program, named Clinical Microbiology Proficiency Testing (CMPT). CMPT soon became a world leader in proficiency testing innovation by developing the tools and implementing a program for clinical sample simulation. Proficiency testing is critical to medical laboratories because it is the method by which they assure themselves, as their own oversight bodies, that they are competent at laboratory testing. Simulations of urine samples, blood cultures, wound swabs, and genital cultures that need to be processed properly and be reported appropriately are sent to participating laboratories not just in British Columbia but across Canada and worldwide. Noble has also taught proficiency testing techniques to programs in Africa, Asia and Europe.

Michael has served leadership roles in the development of many ISO International Standards. His continued ability to organize and lead has been recognized by the Standard Council of Canada – he is the vice-chair of its Advisory Panel on Standards (Health Care) – and by the Canadian Standards Association (CSA) – he chairs its Strategic Steering Committee on Healthcare Technology and Systems. In 2011 the CSA recognized his contributions to quality by giving him its Award of Merit. In addition, Michael has worked with Transport Canada and the Canadian General Standards Board to help ensure national safety with respect to the transportation of dangerous goods as the regulations and standards apply to microbiology and quality samples.

As a medical microbiologist at a Vancouver teaching hospital, he introduced a successful internal audit program and, as the Medical Director of Quality for a community-based laboratory, he led the first medical laboratory in BC to become accredited to the international standard.

Last year, two laboratories in Tanzania with whom Michael worked directly achieved international accreditation. This is a monumental achievement in a country where even the most basics of care can be limited.

As Michael’s nominator wrote: “Dr. Noble has been able over his career to go to places not previously envisioned. He has created new programs, innovated them along the way and seen them grow, develop and prosper. This has been a successful career path.” We respond: to say the least!