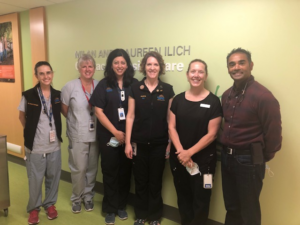 After realizing that gaps in coordination of care were leading to critical safety events for children with cardiac conditions during non-cardiac surgery, an interdisciplinary team at BC Children’s Hospital sprung into action. Together, they developed a protocol that has brought the number of critical safety events down to zero, ensuring safer care for their vulnerable young patients.

Children with congenital heart disease are some of the most complex patients cared for at BC Children’s Hospital, often requiring multiple treatments over many years to address their heart condition. But separate from their specialized cardiac care, those patients also encounter typical childhood injuries and illnesses that require surgery, from appendicitis to broken bones.

For patients with high-risk congenital heart disease, undergoing anesthesia for these seemingly routine non-cardiac surgeries can lead to critical complications and even death. They are also at elevated risk during the pre- and post-operative periods, requiring oversight and careful planning.

In 2018, a critical gap was identified: after building a new, state-of-the-art care centre, BC Children’s Hospital began treating pediatric cardiac patients in one area, while children undergoing non-cardiac surgery were cared for in another. This separation of cardiac expertise from surgical care led to a small number of critical safety events and family complaints, including one tragic fatality in the cardiac population.

An interdisciplinary working group was launched to ensure that no cardiac patients experienced this kind of risk again. Led by intensivist Dr. Mona Patel, the team set out to reduce critical patient safety events in the operating room  and pediatric intensive care unit to zero, for any child with congenital heart disease undergoing anaesthesia for a non-cardiac procedure.

The working group used process mapping, focus groups and interviews with families to identify the process gaps and uncover key insights. It then created clear definitions of “high-risk” cardiac patients, which could be applied to those patients to clearly indicate their risk. The team next created a standard care protocol for high-risk patients  which was implemented in September 2019.

Since then, the protocol has been used by the pre-anesthesia clinic and peri-operative care providers in 100% of cases involving a high-risk clinical patient undergoing surgery, and there have been zero critical patient safety events recorded. A survey of the peri-operative health care team, which cares for patients before and after surgery, was conducted 18 months after the protocol was implemented. Ninety-one percent of respondents agreed that the protocol has made the patient pathway clearer, and 82 percent agreed it had improved post-operative outcomes.

Ultimately, the protocol has created a process for providers at BC Children’s Hospital to come together and create treatment plans that minimize risk and improve outcomes. Through improved communication and coordination, children with congenital heart disease are receiving the best possible care during their surgical journeys.