The BC BPSD Algorithm is a practical, electronic and interactive tool that supports interdisciplinary, evidence-based, person-centred care for persons with behavioural and psychological symptoms of dementia (BPSD). 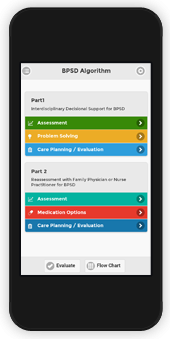 It is very simple to use and completely mobile-friendly – meaning that you can use it on your smartphone, tablet or laptop. The algorithm is intended to be combined with the BPSD Best Practice Guideline, released in 2012.

Who is behind the project?

The BPSD Consensus Algorithm project is a provincial collaborative effort, that originated and was led by Interior Health and included representation from all BC health authority partners (Fraser Health, Island Health, Northern Health, Vancouver Coastal Health), the BC Ministry of Health, general and specialist physician partners, community pharmacists, and the BC Patient Safety & Quality Council.

Why is it important?

Behaviours are not just symptoms of a neurobiological disease. They are a complex response to the interaction of many variables that include the person’s current cognitive abilities, psychosocial and cultural history, physiological and emotional needs, and physical and social environments.

Today, behaviours in dementia are being recognized as a form of communication rather than random, unpredictable or meaningless events that arise from disease. It is helpful to view behaviours as the person’s best attempt to respond to his or her current situation.

Who should use the BPSD Algorithm?

The BC BPSD tool has a specific focus on non-pharmacological interventions and the appropriate use of antipsychotic drugs in long-term care settings. Care staff, family physicians, clinical experts, and health care settings in all of British Columbia’s health authorities are encouraged to review the guideline and algorithm, as they offer evidence-based tips and tools to deliver best practice, non-pharmacological approaches to person-centred dementia care.

Still have questions? Check out this powerpoint to on how to use the BC BPSD Alogrithm.