All patients with two out of four SIRS (heart rate greater than 90, respiratory rate greater than 20, temperature greater or equal to 38 ⁰ C or less than 36⁰ C, altered mental state) and suspected infection and one of the following risk factors should be considered at risk of sepsis:

All patients with two out of four SIRS and suspected infection (with above risk factor):

For adults in SHOCK (SBP less than 90 mmHg and/or MAP less than 65 mmHg) with POSSIBLE infectious cause (septic shock) or a HIGH likelihood of sepsis:

For adults NOT in SHOCK (systolic less than 90 or MAP less than 65 mmHg) with POSSIBLE sepsis, we suggest a time-limited course of rapid investigation and if concern for infection persists:

For adults with a LOW LIKELIHOOD of infection and NOT in shock, we suggest deferring antimicrobials while continuing to closely monitor the patient. 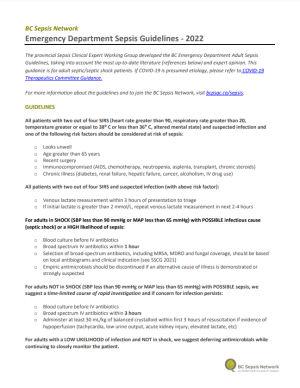 The provincial Sepsis Clinical Expert Group developed the BC Emergency Department Sepsis Guidelines, taking into account the most up-to-date literature (references below) and expert opinion. 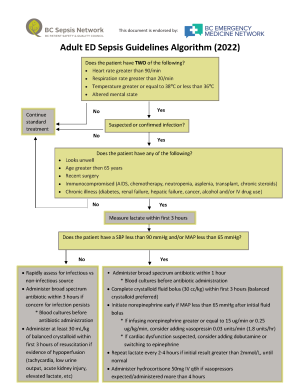 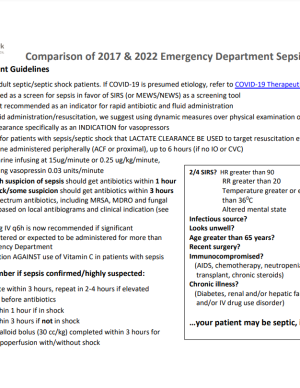 A Comparison of the 2017 and 2022 Emergency Department Sepsis Guidelines 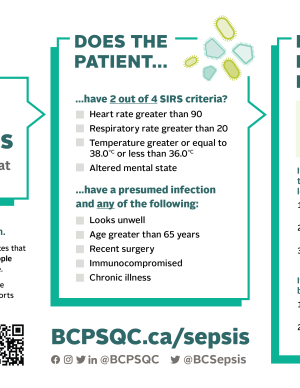 This poster is intended for use in emergency departments to help health care providers quickly spot and treat sepsis and sepsis shock.

Learn More About the Updates

The provincial Sepsis Clinical Expert Group developed the BC Emergency Department Sepsis Guidelines, taking into account the most up-to-date literature (references below) and expert opinion.

If hypotensive despite fluid bolus (30 cc/kg) we suggest:

Vasopressin should not be infused through peripheral IVs.