This award was formerly named “Getting Better”. Our Excellence in Quality category names changed in 2020 to reflect the updates to our BC Health Quality Matrix. Visit our Categories and Criteria page to find out more.

Infusion pumps deliver fluids, medication, blood and blood products to patients. When it was discovered that pumps had unintentionally delivered more than the hourly programmed rate of medication to patients, several teams within Vancouver Coastal Health (VCH) leapt into action to diagnose what was happening.

Thankfully the over-infusions did not cause serious harm to anyone; however, there was great potential for significant harm or death. Approximately 20,000 of the same pumps are used across British Columbia, and usage further expands internationally.  Until the root cause of the over-infusion events could be determined, patients around the world were exposed to the potential risk of an over-infusion. 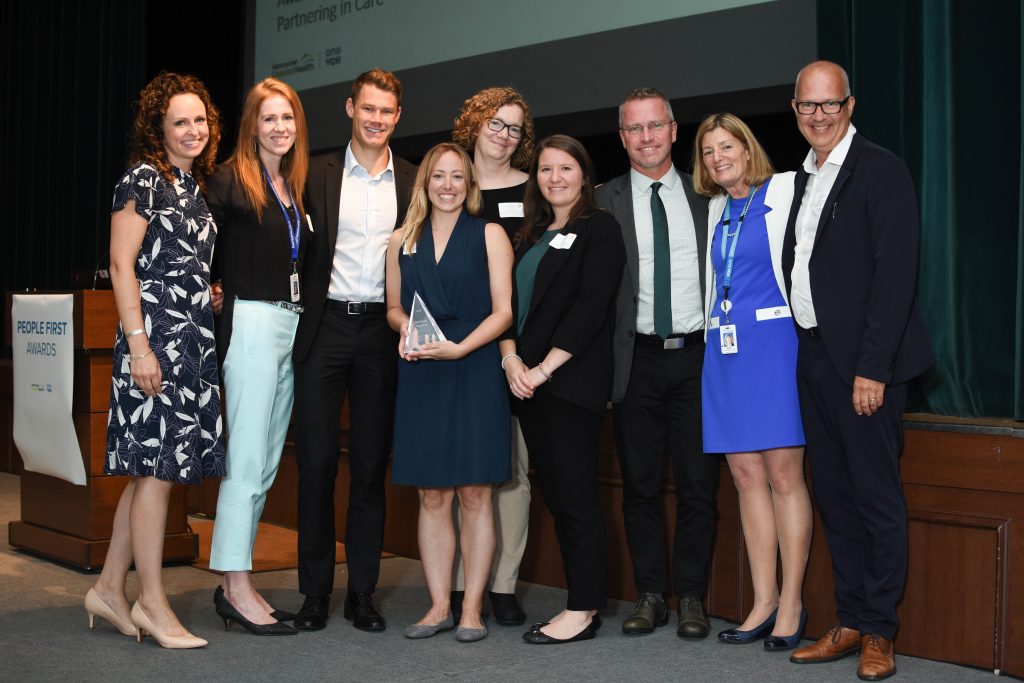 Initially the interdisciplinary team could not determine a cause of the over-infusions, nor could the manufacturer. It wasn’t until one nurse identified a pump that was free-flowing while turned off, video-recorded the unintentional medication flow, and immediately engaged the VCH team, that the investigation could progress. Upon further investigation, the tubing seemed to be the culprit to the over-infusions and the team decided to further examine the tubing by scanning it with micro-CT imaging. Scans revealed that the tubing was not concentric. Non-concentric tubing means that there are variations within the thickness of the tubing walls used to administer fluids and medication. When the pump compressed the tubing walls to regulate the rate of fluid moving through, it could not completely control the flow of fluids and medications on tubing sets that had the concentricity abnormality – even when pumps were paused or turned off.

The investigation led to several corrective courses of action. The pump manufacturer examined its inventory and quality control systems, and worked with suppliers to identify the root cause of the tubing abnormality. The company initially identified and recalled 75 lot numbers that possibly contained the abnormal tubing and were sent to BC, all of which were sequestered by Lower Mainland Biomedical Engineering. In the summer of 2019, the recall expanded globally to include over 150 million tube sets recalled in the US alone.

During the 11-month investigation, the VCH team worked to ensure the province of BC was regularly updated on the status of the investigation and any new findings. These updates occurred through the health authorities’ risk departments, and VCH worked collaboratively with the BC Patient Safety & Quality Council to help issue alerts highlighting the over-infusion events. The BC Ministry of Health and Health Canada were both engaged through the duration of the investigation process and supported the safety alerts that were delivered on behalf of VCH.

The project team also improved processes to identity when over-infusions occur and to investigate incidents in a systematic and comprehensive manner. This includes ensuring that over-infusion issues are reported to the biomedical devices department and entered in the BC Patient Safety & Learning System, implementing a new process when a pump is suspected of over-infusing, and developing teaching resources, infographics and lanyard cards that remind staff about the incident-reporting process.

The dedication of the investigation team cannot be overstated. Over 11 months its proactive and supportive approach during a time of uncertainty and ambiguity kept staff informed and set a tone for a culture of learning and sharing. Its unprecedented investigation led to improved safety for patients throughout British Columbia and around the world.